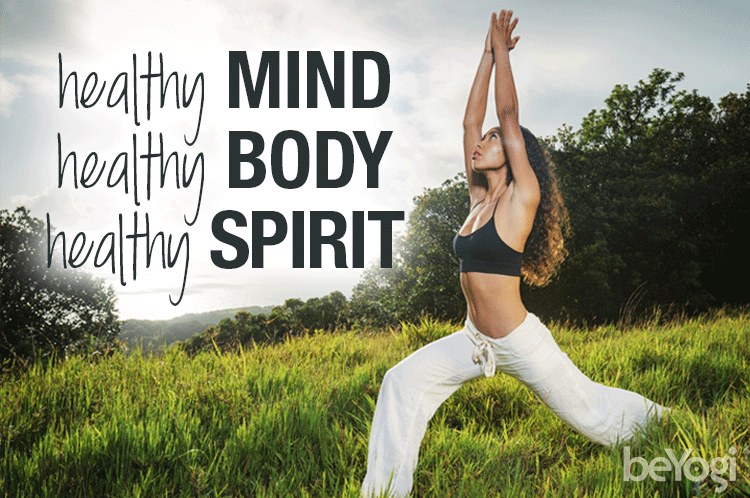 Nearly 20 million people are practicing yoga today in the United States. It has entered the mainstream as a hip, trendy way to get in shape, sculpt lean muscles, and improve overall athletic performance and mental focus. Once you begin to incorporate yoga postures into your training regimen, or even devote an entire workout to yoga, you’ll find it’s the integration of your physical, mental, emotional, and spiritual body.

What does that really mean? Students of yoga will get healthier as they practice, and they will eventually learn to center themselves, be present and aware, and identify with their highest athletic self.

Image and story via http://beyogi.com/yoga-fortifies-mind-body-spirit/

And that’s a fact

Physical exercise has a protective effect on the brain and its mental processes, and may even help to prevent Alzheimer’s disease, according to a recent study at the Laval University in Sainte-Foy, Quebec. Based on exercise and health data from nearly 5,000 men and women, over 65 years of age, those who exercised were less likely to lose mental abilities or develop dementia, including Alzheimer’s disease.

Furthermore, the five-year study suggests the more someone exercises, the greater the protective benefits for the brain—particularly in women. Results showed inactive individuals were twice as likely to develop Alzheimer’s when compared to those with the highest level of physical activity (i.e., vigorous exercise at least three times a week). But even participants with light or moderate exercise routines cut their risk significantly.

How yoga benefits the body and mind

When you come to your mat and close your eyes—to meditate or to simply slow your thoughts and deepen your breathing—several hormonal and physiological things happen, almost instantly.

As you breathe deeper, more oxygenated blood courses through your circulatory system. This helps lower stress hormones, which can compromise the immune system. The oxygen-rich blood also conditions and strengthens the lungs and respiratory tract.

During physical practice, the lymphatic system is strengthened and toxins are swept away. You may notice you get far fewer illnesses when you have a regular yoga practice. Sometimes students come to class with a runny nose but walk out feeling much healthier. The combination of several postures and breathing drills actually cleans out the cardiorespiratory system, eliminating toxins and healing the body.

Moving into deeper poses—slowly and progressively—provides freedom from a variety of diseases and disorders, including migraine, headache, insomnia, and even arthritis. This progression also increases the metabolism in a controlled manner and helps you to feel better all around.

Yoga boosts mental and emotional strength while simultaneously toning the physical body. Joints become stiff due to age or a stagnant lifestyle—but so does the mind! Yoga provides flexibility to all of these body parts; and the mobilization exercises help the body become more active, so as to undertake a variety of daily chores with greater functionality.

Yoga cultivates focus and concentration, and reduces stress by making you less reactive. It opens the spine, hips, and shoulders, where stress and tension hide, and strengthens the many systems of the body, including the circulatory, immune, and endocrine systems. Yoga calms the mind and opens the heart, making you feel more vibrantly alive and giving you a sense of empowerment. As a result, you become more comfortable in your body.

When you feel better in your body, you feel better about yourself and often act better toward others. That’s the goal: In the midst of a stressful day, yoga provides a reprieve from ringing phones, screaming managers, testy kids, and all of the other intrusions upon your day or workout. Yoga restores calmness, balances the emotions, and nourishes your internal body.

7. Prepares you for change

An open and flexible mind energizes and prepares one for change. Some believe visualization helps to transform thoughts into a new life of hope and success. By mentally visualizing success, one can take measures toward converting dreams into reality. Since the best time for visualization is in the morning, try closing the eyes and doing your favorite yoga postures for 5 to 10 minutes when you wake up. This provides an opportunity to find inspiration and self-motivation, as one imagines how to go about changing life.

The science of how yoga empowers the mind and emotions is so tangible, there’s a new and burgeoning field called “yoga therapy.” Practitioners include psychiatrists, psychologists, and social workers who incorporate yoga poses and meditative breathing into their sessions, as well as yoga teachers who want to learn how to address the emotions that bubble up in students during classes or private sessions. The idea is to allow yoga to empower people while priming them to access their deepest emotions.

TIME Magazine reports that since the days of Freud, research into the mind-body relationship has come a long way. Studies show that mental health and mood are largely dependent on physical factors like exercise; and physical health is accordingly affected by mental factors like unchecked stress, anxiety, and depression, which can lead to increased blood pressure, heart disease, and even risk of death. It was perhaps inevitable, then, for patients to start bringing their yoga mats into therapy.

Let's have a real conversation about how you can create intention and take action and move forward for the final time, so you never have to start over again.